I think I just dated myself with that title (I grew up watching Unsolved Mysteries).  haha!

If you’re a traveling family, and you’re familiar with the Ontario, Canada area, then you’ve likely heard of Muskoka.  It’s a series of three primary lakes (Joseph, Rosseau and Muskoka) that forms one of the top cottage destinations in the country.  Some tout the region as the “Hamptons” of Toronto; a place where the rich and famous escape to during the summer months.  But, nestled among the million dollar homes are renowned vacation hotel resorts (Clevelands House, Windermere House, Deerhurst Resort etc).

We visited one such location over these past couple of days (Sunday until this morning) and we were in great anticipation of our adventure.

Honestly, the drive up to the Muskoka area is worth the time and traffic.  IT’s absolutely breathtaking as you exit off the major highway and start along the smaller winding roads.  The Canadian rock faces (which seem to sparkle in the daylight) are gorgeous.  You can see roadside spots where tempted travelers have pulled over to the side of the road to make their own rock inukshuk.

Trees seem to reach into the sky and expand the length of the landscape.  It’s a nature lovers dream (which we all admittedly are in our family).

The resort we stayed at was grand and picturesque…the type of place where many romance novels seem to be set.

But, the excitement sort of died out there.  I understand that a lot of hotels have the low-season, where they bring in a B-team of staff and shut down activities, but it shouldn’t affect how a guest feels at the resort (meaning, no matter when people visit a hotel, they should get the full treatment).

Here are a few things that sort of made me go hmmmmm?!

(3) We ordered a simple breakfast for the kids (of pancakes and french toast) which took over 30 minutes to get to the table.  When it arrived, the french toast was anemic and cold.  So we sent it back and didn’t wait for a new order.  We were still initially billed for it forcing me to ask to have it removed, which embarrasses me to no end and makes me feel cheap.

(5) We took the kids to a kids “oragami flower” craft session.  We were rudely and coldly greeted by two female staff and appeared to want to be anywhere else but assisting young families.  There was only one other group three (three girls) so it was easy to manage the addition of our two boys.  But, their cold attitude resulted in Rick leaving the room with our youngest while I pressed on and stayed through it all.  Jack loves crafts but I know he felt the weird atmosphere because he didn’t make a single peep during the craft, which made me sad.  Our youngest was SO upset that he didn’t get to make the craft with us (which he should have been able to do had the staff been properly trained to work with guests).

(6) Someone took my book from the pool deck. I know you’re not supposed to leave your belongings, but come on?!  I received a brand new novel prior to the trip and was excited to read it (about orphans in Quebec, Ontario in the 1940s/1950s) and it disappeared.  I’ve never had someone take something from me on a vacation even in the poorest regions of the world (Cambodia, Ecuador etc).

Overall, the experience made me REALLY appreciate the incredible times we’ve had around the world…where my children felt welcome, embraced and excited about the magic of travel.  Sometimes, it’s just the little things (like a hotel sending an Instagram message saying the ducks miss the two little boys who always fed them each day) etc.  It’s those memories and moments that we all hope to create and as parents, we aspire to provide our children when we set out on a vacation.

We’ve had many positive experiences in the Muskoka area (Deerhurst, for example) and we will be going back.  We were told by so many of your (via our social media) to go to Santa’s Village, so that’s on our summer to-do list!

Have travel experiences ever impacted your desire to return to a hotel?  Let us know and send us your story!

Note: We’re not naming the hotel name at this time because it’s more about the experience we had and less about the hotel chain. 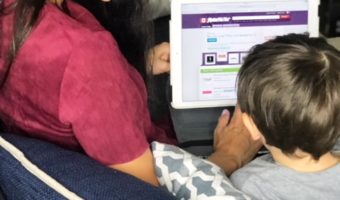