With instances of family travel on the rise, many parents are looking for ways to feel like they have it all…without spending it all in the process.  Posts about how to save money while experiencing bucket-list vacations get a ton of traction on our social media; that’s because flights top many parents’ lists of budget concerns as airline tickets seem to steadily increase in price.

We’ve tried quite a few different “no frills” type airlines to see if we can get our family to and from a popular city without breaking the bank.  In most instances, we’ve regretted our decision to scrimp on flights.

We recently flew with Swoop Airlines, which now offers direct flights from a city near to our hometown (we flew from Hamilton International Airport) right to Orlando, Florida.  Since we have a young family, traveling to Orlando repeatedly tops our to-do list.

How did Swoop Airlines rate?

When packing for the journey at home (our carry-on bags), we prepared for the worst, to be honest.  We’d been on these types of planes before (or so we thought) so our expectations weren’t that high.

We were right to pack up little meals for the boys, large refillable water bottles and plenty of family games and activities.  There are no in-flight screens and you have to pay for all on-board food and beverage including water.  But, if you’re ready for it, we we were, it truly isn’t an issue.  When traveling with small children you’re mostly bringing your own snacks, meals and in-flight entertainment any way so this was nothing different for our crew.

But, we were wrong to think it would be a rough flight with cramped seats and poor service (as we’d experienced on a similar competing airline).  From the moment we approached the check-in desk, the staff were all smiles. I heard the attendant next to mine dealing with a relatively pointed customer (who wanted to travel onboard a flight with a car-seat that was approved for Canadian airlines).  The mother and father were both passively-aggressively commenting about the situation until a calm, level-headed Swoop Airlines employee rectified the situation to everyone’s satisfaction.

Walking up to the bright pink (or perhaps it’s fuchsia) and white plane, via an outdoor walkway, on a beautiful sunny evening, seemed to fill everyone’s step with pep.  People were taking their time, posing in front of the plane and generally acting in a kind, compassionate manner towards all other passengers.  When our boys scampered off in front of us, the large family that now stood between our boys and us, quickly moved out of the way and stepped back to ensure our kids could see us and we could see them.  It was a generous gesture that we greatly appreciated.

Onboard the flight, everything seemed bright and clean.  The aircraft was new and the colour scheme is so uplifting and playful.  We’re a family of pink lovers so we thoroughly enjoyed the bright touches.

When it came time to food and beverage service, I was fully prepared to purchase some milk for our toddler who had cereal in his bento box.  At first, my heart fell as a young flight attendant somewhat rudely and reluctantly told me that they didn’t offer milk on the service cart…the only milk onboard were the small containers for coffee.  I asked for two little creamers just so I could dampen the cereal for my little guy and I’m pretty sure I received an eyeroll as she leaned across my seat to push the attendant call button.

But as a different woman rushed over with a smile on her face, I felt renewed hope.  I asked if I could have one or two creamers and I could see her eyes land on my son’s bento box with cereal.  To my surprise, she hurried back with a fist-full of milk (in those little creamers) and then came back a minute or so later to make sure it was enough. What a relief!  It’s never a good feeling, as a parent, to feel as though you’re inconveniencing people. It makes me feel small and awkward.

So thank you to that wonderful flight attendant who helped turn that moment into a feel-good situation.  My three-year-old wolfed down his cereal and was able to enjoy the rest of the flight (which just so happened to coincide with his bedtime).  So we were even more grateful that he had a full tummy.

Overall, we enjoyed our Swoop Airline experience for many unexpected reasons.  It’s worth the bit of extra planning to enjoy a great journey and know that we can fly out of an airport closer to home and for much less than other airlines.

OUR TIPS FOR FLYING WITH SWOOP AIRLINES:

Overall, we had a positive experience on Swoop Airlines. It’s a low-cost airline, which means there aren’t a lot of frills…and that’s to be expected given that you can fly a family of FOUR to Orlando, Florida (RETURN) for around $750.00 total (minus luggage).

In our opinion, what the airline doesn’t provide (in terms of luxuries like baggage allowance and complimentary food/beverage) it makes up for in service.

We also thoroughly enjoyed making new friends and getting to know new people on our flight. When people are heading to Orlando, Florida it’s usually for a fun, thrilling adventure. So everyone seemed in high spirits. It was refreshing to not sit like a drone with headphones on the entire flight.

As always, we’d love to hear about your personal experience with Swoop Airlines so comment on our social media platforms or send us an email 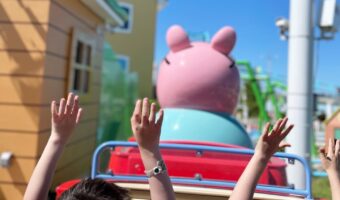