We embarked on what was supposed to be a three to four hour journey home today only to hit a major road trip snag.  In a nut shell, we ended up doubling the time we had to spend in the car.

Thankfully, I’m what most people refer to as an over-planner and over-packer.  But, in this case, that was a very good thing.

We ended up stopped on a four-lane highway in the middle of nowhere with absolutely no resources.

Before we left this morning, I snagged a bunch of turkey dinner leftovers, packed some sandwiches and loaded up on beverages.  The point was to have some meals ready when we got home.  Since we had a little cooler, it all made sense.

When you’re stopped on a highway with no place to turn around, and cars lined up bumper to bumper as far as the eye can see, being an over packer is a good thing.

I took our two and a half year old out of his car seat, scooped out our infant, and let the two explore our (parked) van.  They passed many-a-minute blowing warm air on to the windows and smearing their hands all over.

We had blankets (for warmth and car forts) along with all of Santa’s deliveries in the trunk.

Although the day dragged on and on being stopped in a parked car, we made the most of it and made it through. 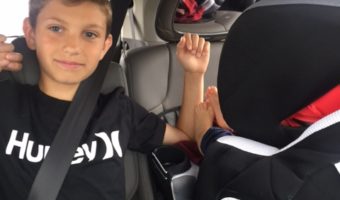