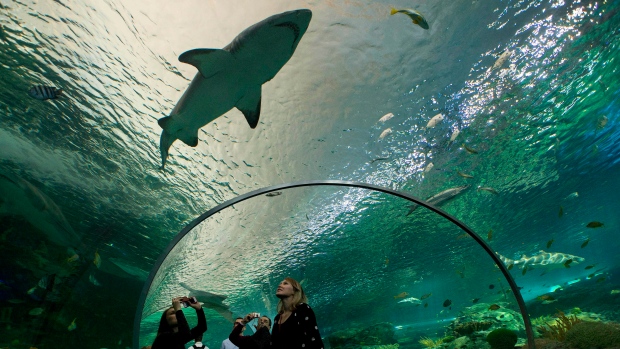 Believe it or not!  A wanted man striped down to the nude and jumped into a gigantic shark tank at the popular Toronto attraction, Ripley’s Aquarium.

When we first heard about this stunt, we were more than shocked.  Weird things like that don’t tend to happen in our local tourist sites.  But, alas, this truly did happen.

We read all of the details on CBC.ca

Essentially, a man allegedly assaulted someone outside of another popular tourist attraction, called Medieval Times, around 8:00 pm on Friday.  He then apparently fled to the aquarium and ended up swimming in the buff with the marine life (including eels, sharks, sea turtles and more).

He eventually left the water without confrontation, got dressed and left at the request of security.  But, what’s most bizarre to me is the reaction of bystanders watching the peculiar situation unfold.  Most laugh, ewww and ahhhh at he clearly shows his privates to the crowd on multiple occasions.

We’ve never seen such a sight in our life (as three blind mice).  No idea why that just came to mind, but we’ve truly never seen something so weird.

Getting Sick at Great Wolf Lodge